Smilies have no place in business, or do they? ;-)

Smilies aren’t a new thing by any stretch of the imagination, yet using them in the commercial world is taboo. We take a look at why... 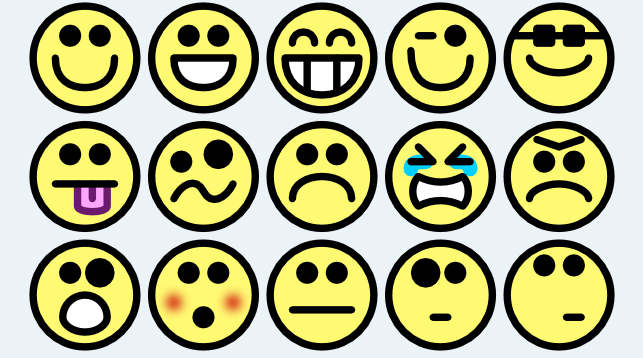 Smilies (emoticons) are far from new, they’ve been around since the beginning of the World Wide Web and are now common place on phones, Facebook, chat websites, Forums, Messenger software and anywhere where people chat using text.

So what is a Smilie?

Well if you’ve ever tried typing the characters : – ) in to a text message on your phone, you’ll quickly see that it gets translated to a smilie face 🙂 by the recipient.

Why is this important?

Well, the fact is there are literally 100s of smilies for all of our common expressions and moods as human beings. There are smilies for every emotion from being happy, laughing, excited to being sad, tearful or angry…and that’s just the start!

Smilies became popular in the early days of the internet by users of Forums and chat clients like ICQ and IRC for the simple reason that in the days of telephone based modems, voice and video conferencing just wasn’t practical, so internet conversation was mostly written.

The problem with everything being in writing, is it’s difficult to read expression and emotional context to a message. We’ve all seen harmless messages be completely misinterpreted as having a different meaning to which the author intended. Smilies got around this problem nicely by allowig the reader to see the intended emotion behind a conversion, hence they quickly gained popularity within the online social community.

How do you use smilies?

Well they’re all based on a few simple characters, so tilt your head 90° to the left and take a look at

Here are some more examples:

If something is meant in jest, it’s often followed by a wink smiley 😉
If you’re happy or excited, then a big smile smiley 😀
Sad, well how about a 🙁 or a crying smiley :’-(

So what about the business world?

Well, the truth is so many business owners and professionals just aren’t aware of what smilies are if they are just don’t feel it’s appropriate because no-one else uses them.

However in their social lives, they’re quite often used all the time. You could put it down to a generation gap with technology, but it’s more a case of not wishing to break the mould.

Wherever their conversation in text, there’s room for confusion and misinterpretation be it in a social or commercial capacity, so in my view smilies have a place in the commercial world.

Add to that, any seasoned business owner will tell you that business is all about relationships.

The most successful business relationships are built on trust, respect which are more often than not built on the back on personality, humour and character. It doesn’t matter how good you are in business, but if people don’t enjoy working with you, they’ll find a way to work with someone else.

Where humour and personality needs to be added to business mix, smilies are essential in the same way that a little seasoning adds a lot to a good meal.